The 100-m telescope has a Gregorian design with a 100-m primary mirror (a paraboloid) and a 6.5-m secondary mirror (an ellipsoid).

The prime mirror has a surface accuracy (rms) of about 0.55mm (best value) and follows a homologous design - this means that it maintains a parabolic shape at any given elevation (but always a different one!).

The secondary mirror (which was replaced in 2006) has a surface error of only 60 μm. Additionally, its surface is equipped with 96 actuators, so that it can (partially) compensate incomplete homologous structures of the main dish (for observations from the secondary focus).

The telescope is located at

the Altitude (track level/elevation axis) is 366.7/416.7 m (height over the reference ellipsoid). These positions are based on observations of the Internation VLBI Service for Geodesy & Astrometry (IVS) (Reference frame is the Earth ellipsoid defined by WGS84).

For some purposes, the height with respect to the Geoid (i.e. "above mean sea level") is relevant. There are different models for the Earth gravitational field (which defines the amsl level), e.g., EGM96 or EGM2008. In Germany, also the DHHN2012 model is in use (sometimes also the older DHHN92). The latter is the basis for most topographic map material of the area. On the other hand, SRTM data are with respect to the EGM96 Geoid.

With these models, the following heights can be derived

(Based on results with online calculators from BKG and geographiclib)

With the lower elevation limit of 08°6', the theoretical declination limit ist -31°22'. In practice, observations below -31°0' do not really make sense.

In addition, please note, that Effelsberg is located in a valley, hence, for a given declination the real visibility is somewhat smaller than the theoretical one. The optical horizon as seen from the lower edge of the telescope is shown in the figure. Although observations below the red line lead to a partly shadowed reflector and an increased system temperature, it is possible to observe sources at lower elevations without much loss at frequencies below 10 GHz. At higher frequencies the increase in Tsys in more severe. As reference we show here also the horizons that represent a 5K and 10K access to the 6cm system temperature with respect to the increase you would expect from airmass. They were were measured using skydips at 6cm wavelength at different azimuth directions. The VLBI SCHED catalog has an even lower horizon to allow a maximum VLBI observing time with stations in the east or west. 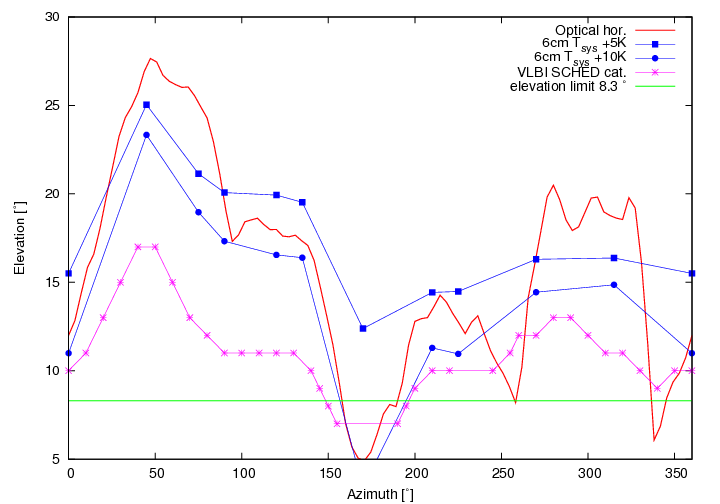