Signal paths to the spectroscopic, VLBI, and pulsar backends

There are several IF chains going to the Faraday room (where the backends live), most importantly the VLBA and narrow-band (SB) IF. Furthermore, the 21-cm 7-feed system has its own IF; and some receivers provide a 2+ GHz IF over optical fibers. All IFs are usually used with different bandwidth setups and need different attenuation to bring the power to a level which is appropriate for the backend ADCs. This is done using the so-called MultiFiBa.

The various IFs coming from the receivers are fed into the 16-channel MultiFiBa, which allows to apply several internal bandpass filters and attenuation. Channels 1-7 and 9-15 is almost exclusively used for the 21-cm 7-Beam system. All other receivers are attached to channels 8+16. For each channel the mode can be changed with the command

where XX stands for the channel which one would like to change and NNN is a three-byte code for the mode. XX can be 01 to 16, or 99 (for all channels. Note, that the MultiFiBa got a very slow processing unit, so sometimes it may take a while until the requested mode is set. Typical modes are:

One can change the attenuation using the commands

where XX is again the channel number (01-16), NNN is the attenuation in 0.1dB steps, i.e., 010 is 1dB, while 100 means 10dB. With the first command one directly sets the attenuation to a value, while the plus and minus version increase/decrease by a certain amount. For example

sets the attenuation in all channels to 10dB.

decreases attenuation in channel 3 by 3dB. However, not all signal paths are internally going through the attenuation unit of the MultiFiBa (as indicated in the table above).

The commands can be sent in the "MultiFiBa" tab within ObsInp.

Note 1: For standard spectroscopy observations with the XFFTS (using MultiFiBa channels 8+16), there is the software XFFTSGui which can be used to set the MultiFiBa modes and levels.

Note 2: The XFFTSGui will only work correctly, when a spectroscopy core is running on the XFFTS.

Note 3: If, for some reason, you want to set the MultiFiBa manually, you should also close the XFFTSGui, as there may occur problems, when multiple clients connect to the former. 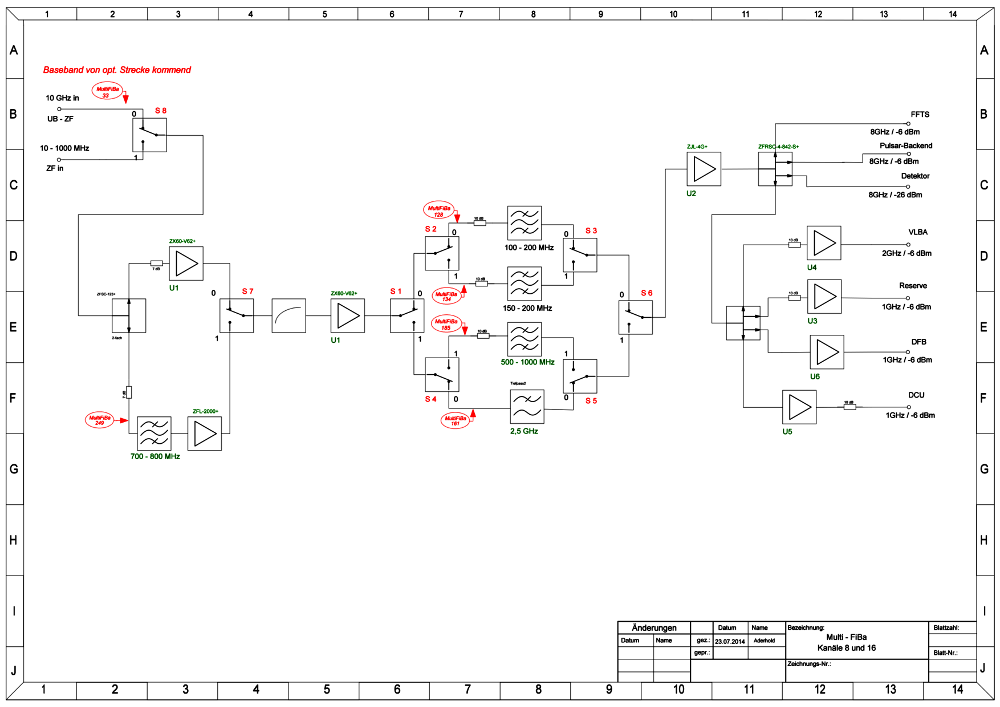